Janet Bradshaw gave a talk about the history of Tatton Park at Chorlton Good Neighbours History Group on April 4th 2013.

Janet is an historical interpreter at Tatton and she illustrated how she portrayed the history since Saxon times to school children through a series of 9 changes of costume. This video gives a flavour of this all-action talk which was very well received by the audiences

Next came the Mediaeval period, the time of the Massey Stanleys (of Dunham Massey fame). Follwed by Sir William Brereton, in 1536, the time of Henry V111

Now it is 1600 and the time of the Egerton family at Tatton Park. The family was led by Sir Thomas Egerton who was Lord Chancellor

Janet as a Victorian Chambermaid

1887 and Lord WIlbraham Egerton is now the owner of Tatton. He was the Lord Lieutenant of Cheshire and the Chair of the Manchester Ship Canal Company. The House has 120 servants and the house was now in its modern form with 24 bedrooms. He could boast that he could travel north 15 miles to Manchester or 15 miles across to Congleton without having to step off his off land he owned 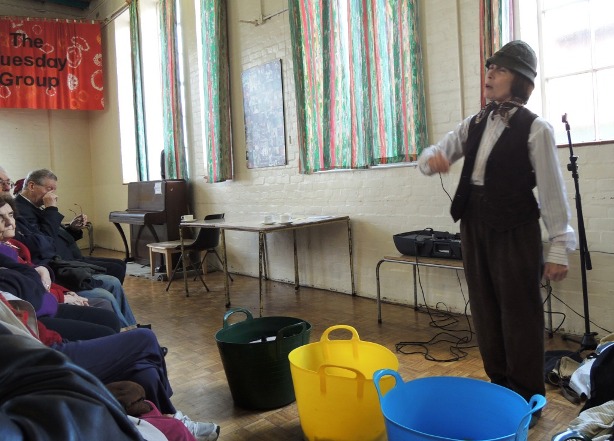 Janet dressed as a Victorian gardener

May 1887 was the time of Queen Victoria’s Golden Jubilee. It was planned for her to stay two nights at Tatton but this was changed at the last minute and the Prince and Princess of Wales stayed there instead