Manchester Jewish History Walk, Thurs Aug 29th 2013
12 of us from the Chorlton Good neighbours History Group talk a walk down Cheetham Hill Road led by Bill Williams, to discover the history of the Jewish community in Manchester. Starting outside Chethams school of music, in Long Millgate and ending at the Jewish History museum 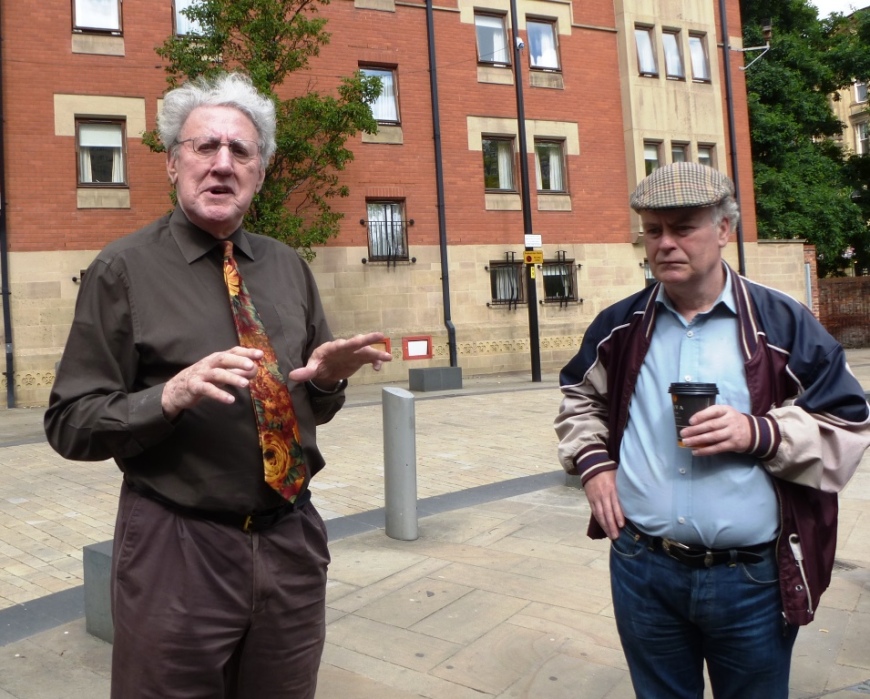 Bill started the walk outside Chethams Music School and on the spot at 144 Long Millgate where stood the Nathan Brother’s house, one of the first places where the itinerant Jewish pedlars first settled in Manchester

This an old photo of the Nathan Brother’s house, taken later when this part of central Manchester became known as Poet’s Corner. The X on the top right of this postcard was marked by a son of one of the Nathan brothers to show which one was their house

Oy Chee and Carolyn sit on a big chair outside what is now a furniture store at the beginning of Cheetham Hill Road, near Victoria and which had been one of the first synagogues to be opened. It had been previously a Christian chapel, but was surplus to their needs and so was converted to a synagogue

Bill talks to the group at the bottom of Cheetham Hill Road, opposite what was was the Red Bank district whose poverty was described by Engels in “The Condition of the Working Class in England”.and in which many of the first Jewish immigrants to Manchester from Eastern Europe settled. Bill is sur[rised that no recognition is given to this historically important community and the district has now been renamed the “Green Quarter” to help sell the new blocks of flats

What used to the ‘new’ synagogue, built almost next door to the Great Synagogue (now demolished) with which there was no love lost

Built in 1856-8 the Great Synagogue on Cheetham Hill Road, remained the most prestigious synagogue in Manchester until the 1960’s when most of its users had moved further down Cheetham Hill Road or further afield and so were unable to walk to the synagogue as orthdox Judaism requires. It was demolished in 1981;

“The Jews school” in Derby St off Cheetham Hill Road, Built in 1869 by the richer Jewish community to help the assimilation of the more recent and poorer East European immigrants 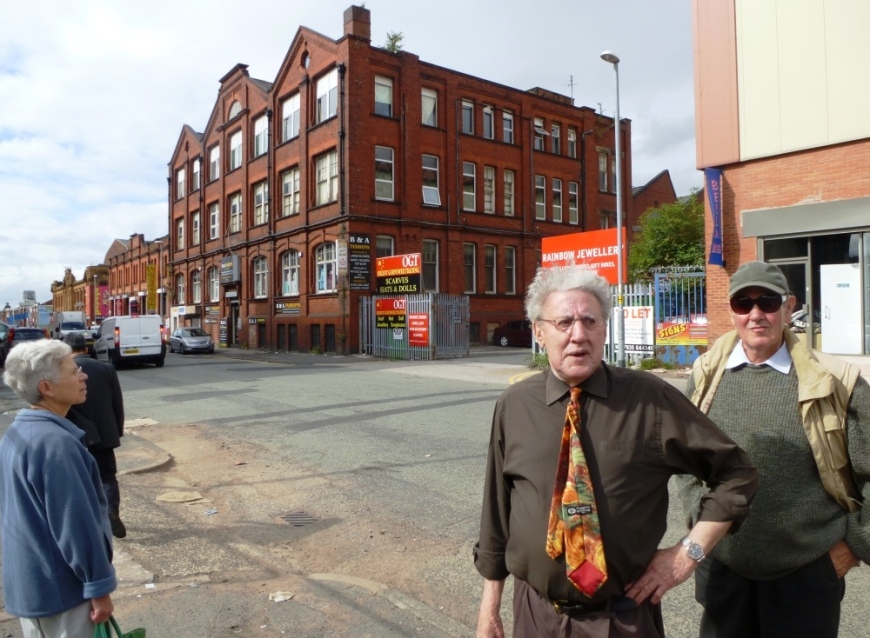 The original Marks and Spencers warehouse, built 1900-02 in Derby St.  Michael Marks, originally a stall holder in Leeds then set up series of shops.Marks and Spencers was founded in Manchester when Marks got together with Spencer an accountant; their first shop was on Cheetham Hill Rd. This was the warehouse they supplied the shops from; their motto was “don’t ask the price, it’s a penny” 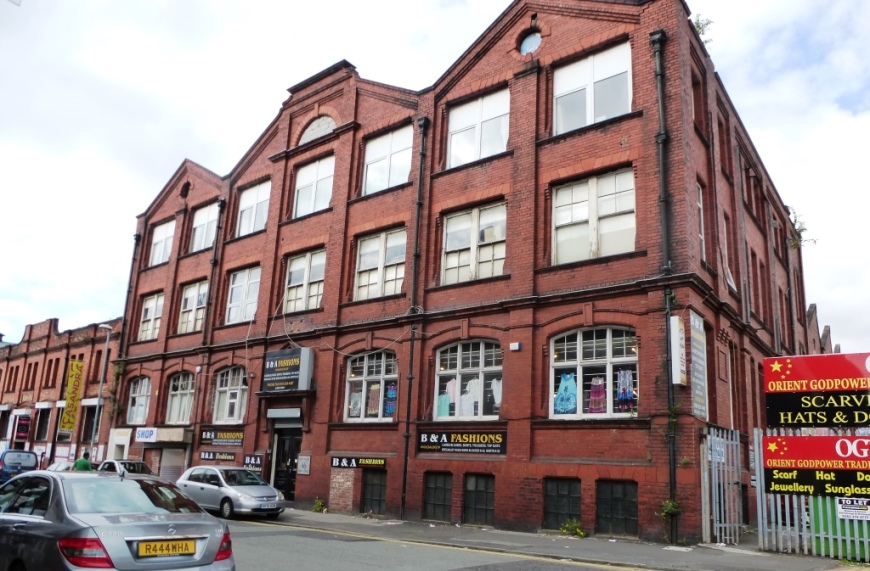 the group stop to look at the sign “J.Cohen” on the building opposite the M&S warehouse. He was Spencer’s brother in law and claimed to have invented the ‘penny emporium’ which M&S would later claim was their invention

This building was set up to provide additional schooling (bit like Sunday schools), and students would make their way to this after attending the Jews school round the corner. The sign above ‘Cuba’ says “Harry Cohen memorial wing, erected 1931, 5001”

This building students would pass on their way from the Jews School to the “Harry Cohen memorial wing”. It was a sausage factory at the time. Workers where known to have called out to the Jewish students to have a sausage and sometimes animal fat was thrown at them

We finally made it to the Jewish Museum

Bill then told us the background and some history of the Jewish museum, which we were then able to look around 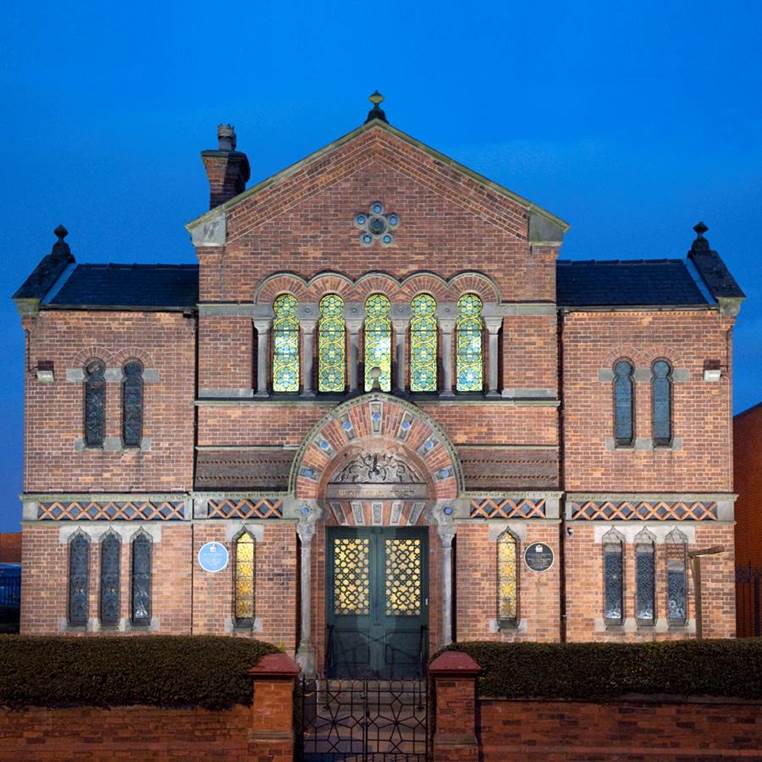