It has been announced in the press today that the Arctic Star medal for the Arctic Convoy veterans, including Chorlton Good Neighbours own Bob Cowan, will be sent out in the next month or so.

Mark Francois, the defence minister, today (26-02-13) unveiled the design of the new medal, which is pictured below 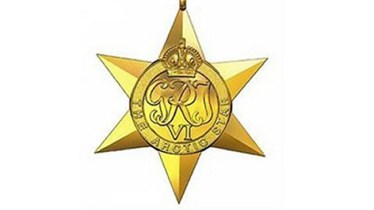 The medal will also go to John Mackay from Chorlton another local Arctic Convoy veteran. Both Bob and John were present at the CGN event held on Feb 7th 2013, where they were presented by plaques from CGN and by Russian WW2 Arctic Convoy commemoration medals present by Andrei Makarenko from the Russian Embassy