The Chorlton Good Neighbours garden club was closed for Christmas and New Year but we’ve had a busy few weeks as you will see. 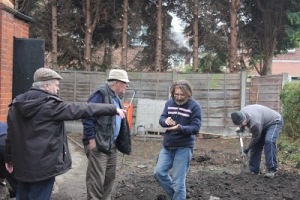 To begin with things got very physical down at the garden when we decided to tackle the foundations of the old scout hut. There had been all sorts of plans to utilise the existing bricks and mortar for a path or work round it but our new volunteer John had some confidence in this area and he went to get his pick axe so we could just get rid of it! This created a real buzz and everyone worked really hard to get the foundations up in just a couple of hours. Well done everybody!

We also managed to get hold of large chest to lock up our tools on site. This will be of massive benefit because we currently use a church cupboard to store our tools – now we will be more self sufficient. The tool shed was a real bargain as it was bought on gumtree but this meant that it had to be taken down by our head volunteer Bernard from someone’s garden and then put back again from memory during our gardening session. This created a few interesting “conversations” and more than a little head scratching as we worked out which bits went where. It was a nice job to do indoors though as we hit our first rained out session of the year. The only problem was once we’ve created this massive chest was how we were going to get it into the garden. Fortunately creativity and group work won the day and our tool chest is now fully installed

Christmas and New Year – a time of celebration and new beginnings. In aid of this we had a little social down at the site with jacket potatoes cooked in the fire (not particularly christmassy I know but its a more preferred tradition to brussel sprouts), mulled apple juice and minced pies.

With a nod to the new year we planted a few bulbs and some hardy plants. It is a risky business planting this late in the year but if it works out we will have some colour in spring. It also feels like a nice positive thing to do at the end of the year 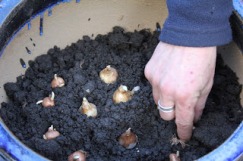 Our Gardening Sessions are 10-12.30 every Friday (although we are now closed until the new year). If you would like to find out more contact us on 0161-881-2925 or come along to our office at Wilbraham St Ninian’s Church, Egerton Road South and have a look for yourself.